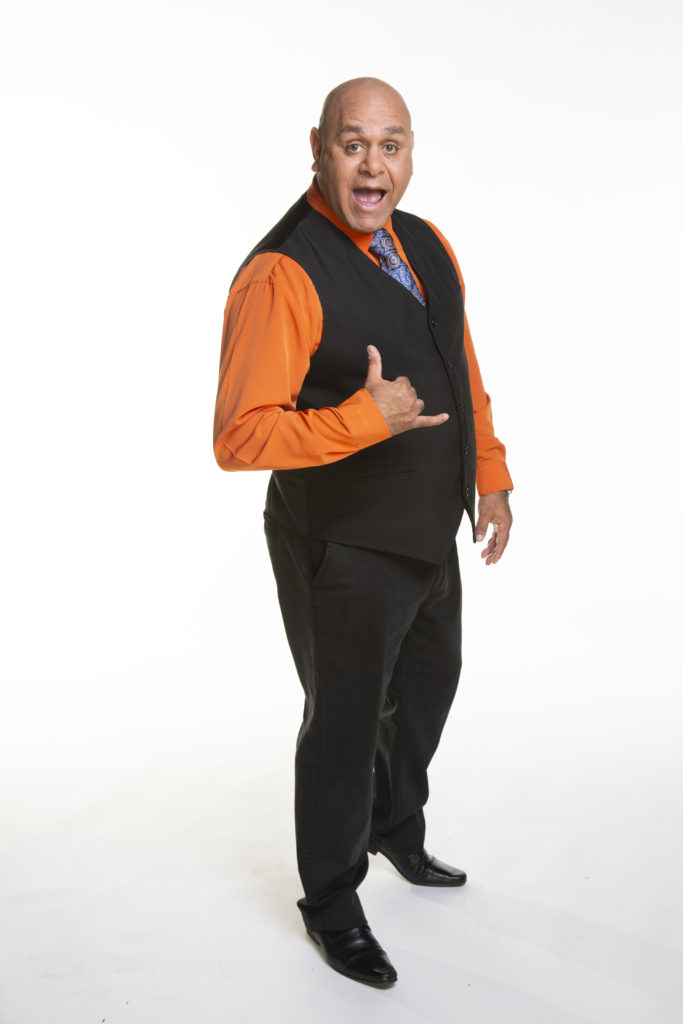 One of Australia’s premier Aboriginal comedy stars, Kevin Kropinyeri is a one-man whirlwind that will have you holding your sides laughing, as he shares tales of growing up, marriage and the particular, absurd challenges of life as an Aboriginal Australian family man.

Kevin tours Australia constantly, appearing all over the country, including at some of its most remote communities, and is a bona fide star of the Indigenous performing arts, appearing at the Deadly Awards at the Sydney Opera House six years running. As well he is a regular feature on the mainstream corporate, club and festival circuits and a Comedy Festival Roadshow regular.

He is also steadily building a substantial TV and media profile with a long list of special guest appearances.

Kev boasts a rich background as a state grade footballer and basketballer, a visual artist and years as a Youth Worker and an Aboriginal Education Worker … and now, as the exciting new face of black Australian comedy. 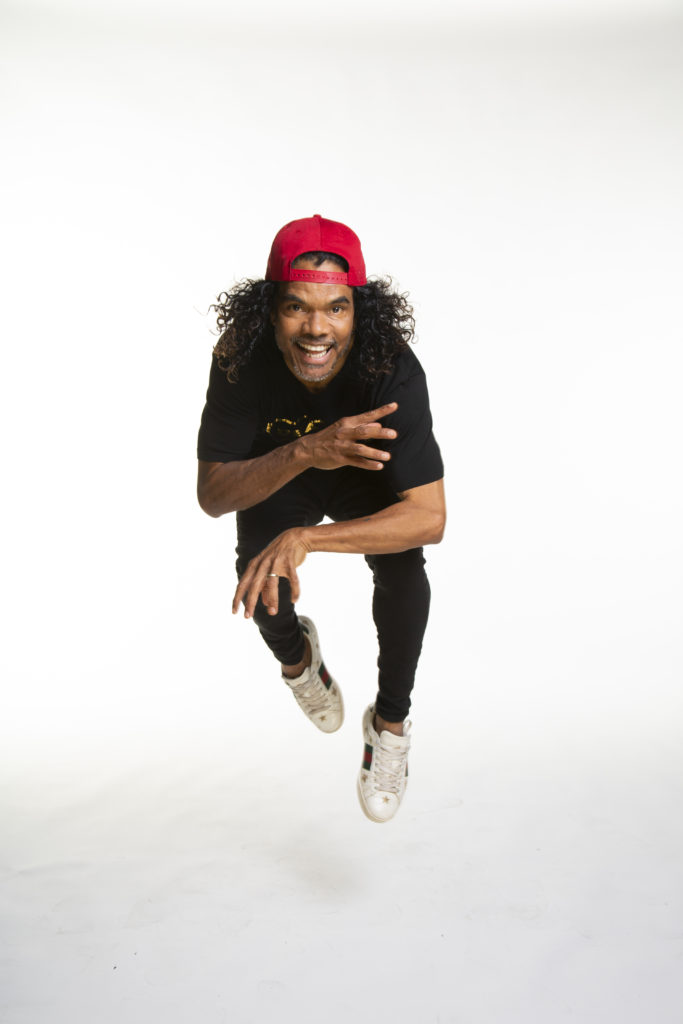 Sean Choolburra is known and acknowledged as the funniest and most enduring Aboriginal Australian comedian. Born in Townsville, Queensland coming from a family of twelve, his comedy is created from a wide variety of life time experiences, stories and observations.
Sean is a proud Aboriginal man who maintains and practices the cultural traditions of his father’s people the ‘Girramay’ and his mother’s people the ‘Kalkadoon, Pitta Pitta and Gugu Yanlanji’, which he draws on when he delivers cultural workshops and shows.
Sean understands and takes very seriously the responsibility of being a ‘Role Model’. He has recently become an Ambassador of the Stronger Smarter Institute. Sean is involved and has starred in various media campaigns for ‘Indigenous Jobs Australia’, ‘Queensland Health’ and he promotes healthier lifestyle choices in the “No Smokes” campaign sketches for Menzies School of Health Research.
Sean’s attitude and work ethic has seen him performing as a cultural dancer for ‘His Holiness the Dalai Lama’ and ‘Prince Charles’. He is one of the few comedians who choose not to use ‘profanity’ building his craft around those early comic pioneers. Sean creates his unique brand of comedy which sets him apart and is therefore suitable for audiences of all ages. As a comedian Sean’s audiences whether corporate, private or public are always delighted by his wit, energetic delivery, improvisation and non-stop dance moves.
Sean conducts workshops where he presents culture alongside his comedy. He has used both these tools to educate, inspire and engage young people in his home country of Australia, as well as Canada, Japan and New Zealand.
Sean has performed at various festivals including Adelaide Fringe, Edinburgh Fringe, The Dreaming and Woodford. Recently, he hosted the National NAIDOC Awards and in addition annually hosts the Melbourne International Comedy Festival’s “Deadly Funny’s”.
His new show “Straight out of Townsville” is a reflection, showcasing his unique brand. It is a show based around relationships and family, undoubtedly with Sean’s stamp on it.
Stand-up comedy remains Sean’s primary passion; that is until he achieves the dream of his own television show. He continues to improve his skills, pursuing his interests in acting, hosting, dance, culture and writing with that clear goal in mind.
When you see Sean, you are left wishing you had the Energy, Excitement and Dance Moves of this truly all round ‘Entertainer’. 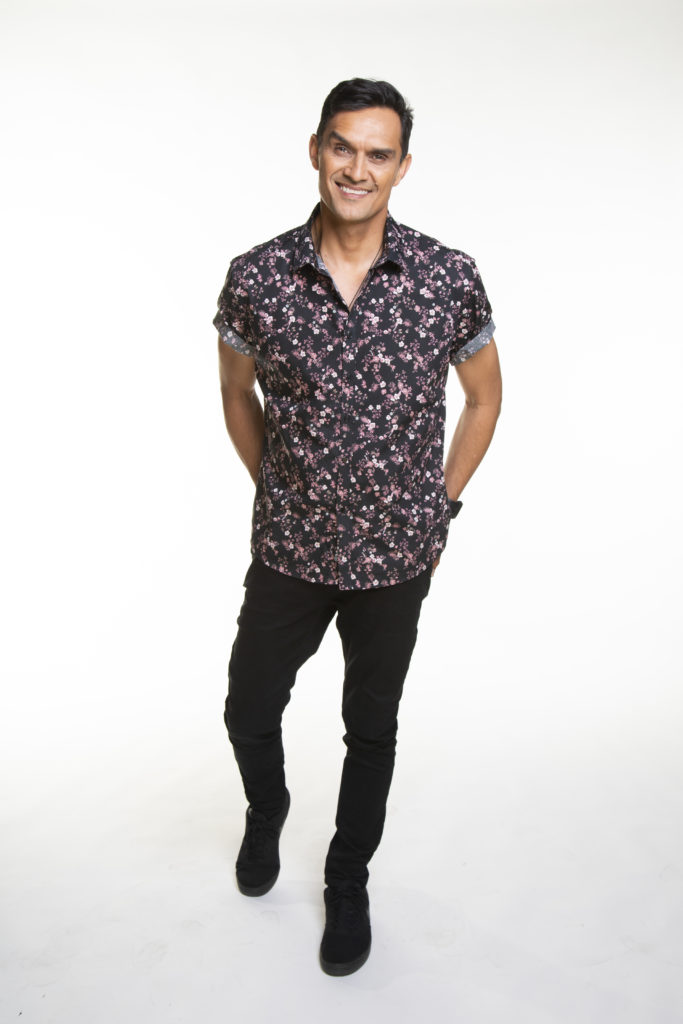 From an early age Andy Saunders has been telling jokes in front of a variety of audiences, he was always destined to make people laugh.

With an impressive and an extraordinary ability to use humor to break down barriers and stereotypes as well as provoke thought in any audience, Andy Saunders takes satire to new heights.

Trenchant observations of human behavior and sharp material combined with skills in attracting and holding the interest and attention of audiences of all ages are a powerful combination.

Andy has quickly evolved in to one of the most popular and successful acts performing around the country today at a variety of events and venues.

His star continues to rise after performing successful stand up routines for many tours, events and standalone gigs such as:

–    “This show is hilarious. Belly aching, cheek hurting, hilarious. See it, see it, see it”. Adelaide Advertiser
–    “Disarming Wit & Charm”. In Daily
–    “Andy Saunders comedy was out there. As well as stand up he beatboxed & did impersonations, and maintained across all these elements a high level of skill”. Rip It Up Adelaide

The only way is up and this is one comedian that can’t be held down. Andy believes that the best way to change the world for the better is through laughter and that a human being is at their most vulnerable while laughing, so get ready to be at the peril of this new, relevant and necessary brand of comedy.

“They say laughter is the best medicine; to laugh and to entertain allows a unique catharsis. I’ve found no better way to express my innermost vulnerabilities and normalise them than through comedy. I’m passionate about Indigenous advocacy, removing the stigma regarding mental health issues and imploring people to replace apathy with empathy and making people laugh is such a great way to tackle such big issues.” – Stephanie Tisdell

Steph Tisdell with her magnetic personality and hilarious sense of humour never fails to delight audiences. Only new to the comedy scene, she is making a fast rise as one of Australia’s funniest female Indigenous comedians. Best known for her bold, brassy stand-up routines about body image (owning your own size), relationships and split-personalities.

A proud Murri (Qld Aboriginal) woman, who started doing comedy from a dare in a bar in Dublin while back-packing around the UK and parts of Europe. It didn’t take long for Steph to pursue a career in comedy and take out the National Title for the 2014 Deadly Funnys.

Making a move to Edinburgh, Scotland to develop her technique, delivery and stage presence as a comedian, she was taking the stage every chance she could performing regularly with the famous “Stand Comedy Club” alongside world-class comedians.

Steph was making herself a name and soon becoming a crowd favourite in Scotland. She was a semi-finalist in the coveted “So You Think You’re Funny” Competition, runner up in the Hilarity Bites Best Newcomer and a finalist in the Yesbar Comedian of the Year Competition. Performing on various bills during the 2015 Edinburgh Festival, she also delivered a solo performance called “Boob-a-rang” during the Fringe.

In 2016 Steph returned “down under” to open for the “Scottish Comedian of the Year”, during the Adelaide Fringe Festival. Coming back to Oz, Steph needed exposure to grow and develop an audience. She soon made that happen being a regular for “Best of the Best”, Phatcave, Set List and featuring on “Dumb White Guy” podcast with Brendan Burns, Greg Fleet, Lawrence Mooney and Lindsay Webb”.

Taking a year off, Steph returned to the scene in 2017 with a renewed sense of purpose, passion and depth to her material. Her comeback went off with a big bang, appearing as a special guest for the Aboriginal Comedy Allstars as part of Australia’s largest comedy festival, the Melbourne International Comedy Festival. Steph shared the stage with Australia’s best Aboriginal comedians Andy Saunders, Kevin Kropinyeri and Sean Choolburra.

Steph’s new comedy is vulnerable, real and insightful. Her witty observations challenge stereotypes in a non-offensive and hilarious way. Her presence is powerful on stage with her impressive facial expressions, outrageous re-enactments and improvisations.